So I had visited Paris a couple of times before and done the classic tourist route of The Eiffel Tower, Louvre and Eurodisney. But I knew from the start that this trip was going to be different. With four friends now living in the French capital it was long time for a rendezvous – but this time I would be at a major advantage… staying in a proper Parisian flat, with people fluent in the language and who are totally and every so coolly in the know about the ins and outs of that vast cultural epicentre. So, in a rather pretentious manner, I told my hosts that I didn’t care about the Arc du Triomphe and Sacre Coeur, and that I wanted to do whatever they normally do. And so we did. And so I saw, a completely different city. Scenes from a Paris that I didn’t even know existed were acted out before me, and enchanting visual spectacles along with numerous culinary delights filled my weekend with excitement.

I emerged from the airport somewhere in the region of the second arrondissement and was greeted by an icy blast of harsh December wind shooting through the winding tunnels that make up the immensely labyrinthine underground world of the Paris metro. I headed towards the exit, fighting against the stinging chill in the air and ice covered steps and popped out somewhere that instantly looked fantastically Parisian. Creamy, weather beaten apartment blocks with an array of stores and restaurants nestled below them lined the streets in all directions. High above, long, rectangular windows embellished by iron railings looked out onto the bustling world below, and lonely glowing lanterns cast a movie-worthy hue on the frost-nipped pavements. I looked around me, inquisitively and delightedly taking in the distinctive ambience. But naturally, was quickly escorted to a bar for my first vin rouge of the weekend.

I woke bleary eyed the next morning and was taken for breakfast on Boulevard de Bonne Nouvelle where I was greeted by a perfect buttery-melty croissant, freshly squeezed orange juice and café crème, which although were delicious, were seriously expensive, proving my suspicion that Paris is capable of breaking the bank regardless of whether you’re in a tourist trap or not. Next, we headed over to Rue de Rivoli for a browse around the shops, in particular the BHV department store – one of my friends’ favourite places. It was then suggested that we went for a spot of lunch in the area of Paris where she works on the outskirts of the city, so that I could see somewhere different and try an authentic locals in the know meal. So off we hopped to a place called Fontenay-aux-Roses, to the Braserie L’Odyssee, and sat in a squished corner on a tiny table surrounded by hungry French workers – brilliant!

The menu du jour was extensive and baffling but thanks to my year 7 French I managed to decipher that cheesy onion soup and steak and chips with some kind of onion sauce (most things seemed to be based around onion) was indeed an option – and what a marvellous choice it turned out to be! A huge steaming bowl of comforting wintry goodness arrived as my starter and I tucked in with glee. The rich, rustic flavours of the soup were divine and the juicy breaded topping oozing with herby infusions. It really was perfect, and so, so filling! Next came the robust plate-devouring beef filet accompanied by a potent onion puree and a chaotic mountain of fries. The meal was simply delicious but unfortunately, given the quantity and the soup starter, unfinishable. However, I was most pleased to have dined out with the locals and sampled a truly authentic French lunch.

Of course, we needed a good while for the feast to go down, but by late afternoon we had made our way to the Village de Noël, the ever so festive Christmas market boasted by the Champs-Elysee. The market goes on for as far as the eye can see on both sides of the avenue and offers all of the usual yuletide goodies – mulled wine, hot cider, bratwurst, an endless array of glinting chocolates, and more decorations and gift ideas than one can handle in a single visit. The extent of the market is rather mind-boggling, easily rivalling the German effort, and with twinkling Christmas lights illuminating the sky, and the waft of hot festive treats swirling in the air this is surely one of the best ways to spend a shivery December’s eve. 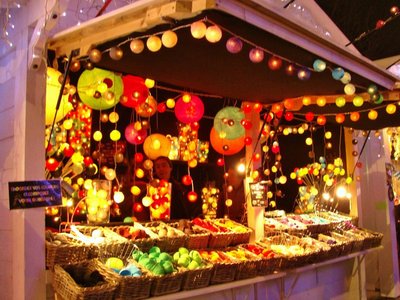 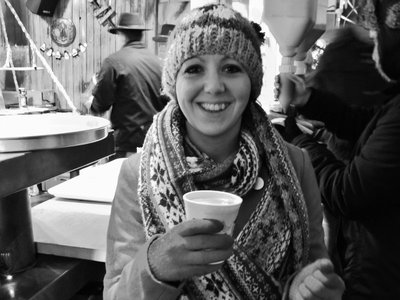 The next morning I was taken for breakfast and a stroll along Rue Montorgueil. This lively street had a fantastically olde-worlde feel to it, like a kind of Oliver Twist ‘Who will buy this wonderful feeling’ scene with a Parisian twist. Cheese shops, wine shops, ham shops, and fish shops mingled with flower sellers, tailors and cute boutiques. Inviting cafes, no doubt with a thousand tales to tell, lined the pavements and customers sat out in the morning chill leisurely smoking and sipping away at their coffee. The street had a vibrant, aged ambience, suggesting that it hadn’t changed much in centuries and I truly hope that it stays that way as it remains one of the quaintest and most colourful places I have seen in the city. 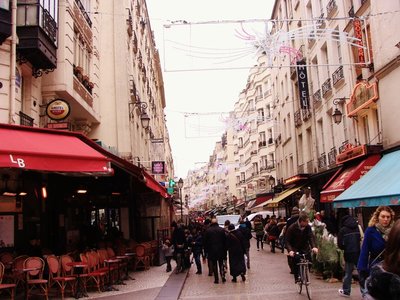 Soon it was lunch time and we headed over to Rue Saint-André des Arts, in Paris’s Latin Quarter. One of my friends knew of a special crepe restaurant and was eager for me to experience it. Creperie des Arts, as it was named, was a charming and amusing restaurant set out in a cave-like style with curious art work and rustic lighting. Tables were housed in stone booths giving the impression of dining in toasty caverns. Indeed, the interior was most peculiar and provided a quirky lunchtime treat. As for the food, there were abundant crepes on offer, both sweet and savoury, and typical Breton drinks such as sweet cider to wash them down. All in all a great time was had!

Next, it was off to Le Marais, which I was fervently informed was one of the coolest areas of Paris. And of course my knowledgeable hosts were right! Le Marais was none other than amazing. With a strong Jewish influence the narrow streets were buzzing with history. Alluring display windows intrigued and contented me and small cafeterias beckoned me to pop in for a warm. Vivid shop fronts and richly colourful awnings enchanted me at every turn whilst elegant squares whispered tales of the artists and aristocrats of times gone by. Chic is the rule for everything on sale along with the occasional flirting with the vintage, and on every corner is an opportunity to take the perfect black and white photo of the perfect Parisian scene. 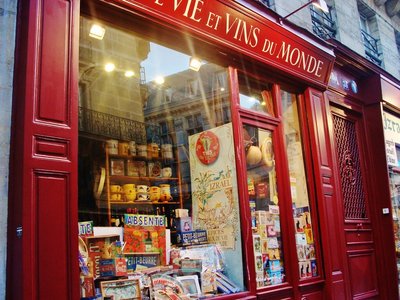 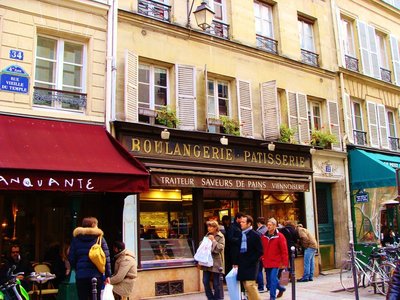 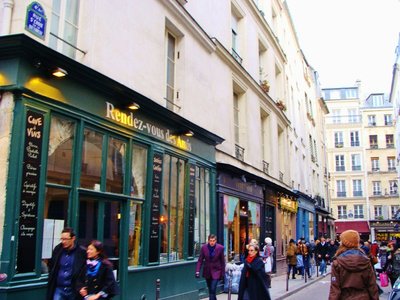 The final thrill of my weekend was to be a raclette party (apparently a typically French winter affair) and since I had no idea what a raclette was I was eager to see what it entailed. Cheese, and lots of it – that’s basically what it’s all about. Melting cheese on mini spades under a specially designed table grill then tipping it over potatoes and ham – those French are genius! The problem I discovered was that it is very easy to get carried away. You hear yourself saying ‘oh go on then... just one more slice’ time and time again until eventually, you can’t move. No regrets though, it really was a truly memorable way of ending my weekend in Paris and something that I shall certainly be repeating in the not so distant future! 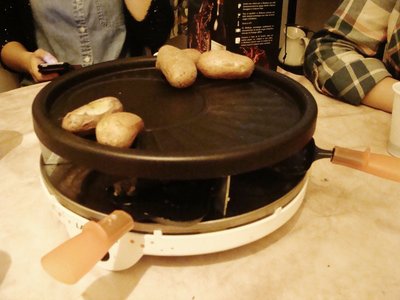 And so I discovered that weekend, that as wonderful as the famous landmarks are, they are merely the beginning. The Eiffel Tower is astounding no doubt, but there is so much more beneath the surface of the city, so much to see, to do, to taste – it really is worthwhile making a friend in Paris!

Perpignan – perfect for a quaint hit of French culture 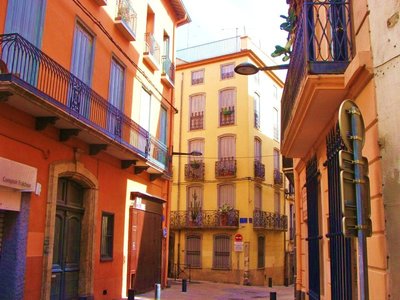 Just a couple of hours north of Barcelona, across the Pyrenees is the charming city of Perpignan, cute, tasty, colourful and perfect for a weekend get-away. It’s so stereotypically French that it’s like being on the set of Amélie, or at a French-themed, mini theme park. The old city centre is full of narrow pastel shaded buildings which during the varying lights and shadows of the day display a delightful spectrum of amber hues, perfectly contrasting with their blue-green shutters. Quaint, winding streets full of fashionable boutiques tantalize the coins in our pockets, whilst sticky patisseries and rustic delicatessens awaken our taste buds with gusts of fine aromas. 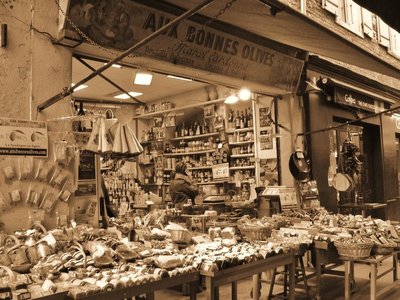 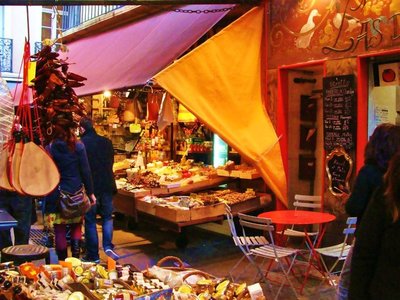 Saturday in the central Place de la République, restaurants are buzzing with locals perched in the afternoon sun, sipping on a bubbly cidre or two and tucking into steaming buckets of mouth-watering muscles and sides of frites. Later they lazily puff on fragrant cigars, always keeping a watchful eye on the televised rugby match, the melody of which flowing like a wave under the din of kitchen clutter and asthmatic exhalations of coffee machines. Every so often, the twee symphony of the old fashioned merry-go-round strikes up and we are transported back in time to days of the belle époque. A short stroll from the square, the crimson-brown castillet sits on the river-side providing Perpignan with a splash of Catalan culture and topping off the medieval ambiance of the old city. Atmospheric market stalls selling tempting local produce embellish the outside, and entice passers by to purchase a little gourmet treat for themselves. 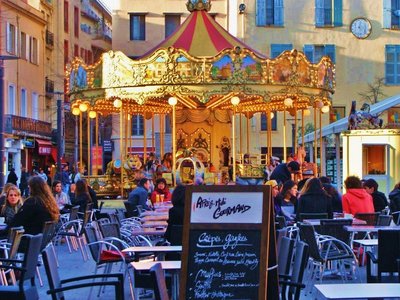 Sunday morning, and Perpignan is sleepy. The only thing for it is a delicious petit dejeuner and a chance to put our year-seven French to the test. The result, is surprisingly effective, and expectedly delicious. Freshly made creppes with fantastically zesty lemons and a warm café au lait are the perfect start to our day, and set the pace for a laid-back few hours of rambling. Just further out from the nucleus of the old city, a labyrinth of quiescent streets amble to and fro, the sounds of city life muffled behind tall tell-tale houses. Now and again we stumble upon a tiny, forgotten square or an enchanting well frozen in time, and eagerly take photos from every angle in an attempt to capture the perfect arty shot. Our stroll continues through bright, fanciful lanes, and fuelled by exquisite scents of lunch-time preparation we dream about rustic southern French life and moreover, ponder about how much wine and cheese we will realistically be able take back with us. 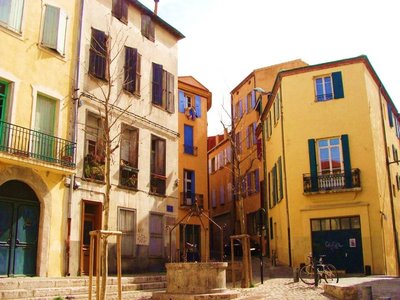 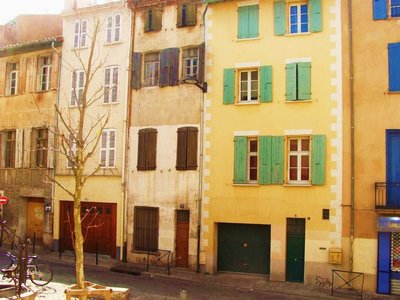