‘Més que un club’, (more than a club) Barça’s motto really is somewhat of an understatement, for it is so much more than a football team. It is a culture, a beacon of hope, a way of life and is inextricably intertwined with Catalan identity. Its political connotations are undeniable, and Barça acts as both a fervent expression and international ambassador of the Catalan ideal. ‘Tan se val d'on venim, si del sud o del nord, ara estem d'acord’… ‘It doesn’t matter where we’re from, be it the north or the south, we are all in agreement’ proclaims the team’s anthem, and true it would seem, as for almost everyone I have met during my time in Catalonia, Barça is one of the main symbols of Catalan culture, one of their proudest emblems and their biggest international export. The pure joy they bring to people can be seen on endless occasions. For me the most explosive expression of true devotion to the team was witnessed whilst experiencing thousands of fans taking over the Rambla in celebration of winning the Champions League – flags, flares, horns and fireworks filling the street like a Barça themed flying circus. It was then that it truly, dramatically and profoundly hit me, that Barça really is more than just a team. 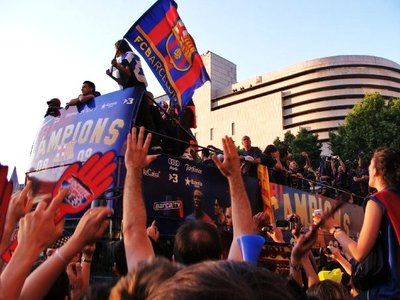 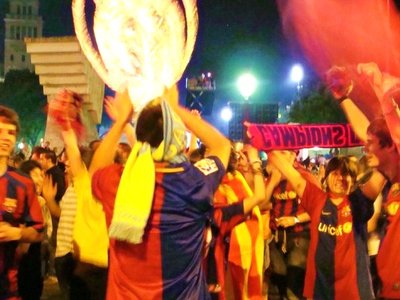 The intense awe manifested toward the club is captivating, exciting and mesmerising, and never more so than in the run up to and ardent final encounter between Barça and Real Madrid, when bars are brimming, literally to over-flowing point with burgundy-blue-clad die-hard fans. A deep and historic rivalry exists between the two and is passed down from generation to generation, for better, or for worse. For better, in the innocent pride shown by children toward Barça – sometimes they will turn up for English class and shout with bursting joy, ‘Mira! Mira Laura!’ – ‘Look Laura! Today I’m wearing my Barça shirt!’. ‘Y mira també!’ – ‘And look! I’ve got the matching shorts too!’. Their excitement is so sweet that I can’t help but giggle. There is perhaps a ‘for worse’ however. With the increasing hype surrounding the call for a referendum on Catalan independence, Barça has, whether it wanted to or not, become a tool used by many locals to express their political desires. And children have caught on. During a recent match I attended at Camp Nou some (probably no more than) five year olds were (no doubt copying what they have been hearing around them recently) chanting ‘In-De-Independència!’. This made me feel a little uncomfortable, as they probably had no idea what they were shouting but had learnt from those around them that this is what is now the norm to chant during a game. 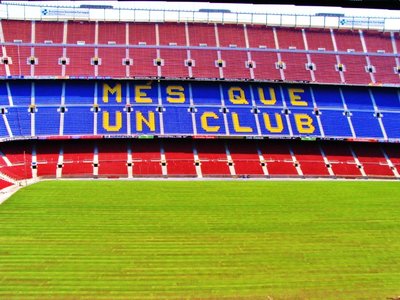 Anyway, politics aside, experiencing first hand a Barça match at Camp Nou is unforgettable. As we climb higher towards our stand and finally pop out amongst the sprawling seats, the impact of the sight before us is none other than overwhelming. The feeling that takes over as a miniature us is packed amongst a mighty sea of over 98,000 is exhilarating. And as the Camp Nou gloriously towers around us we really sense the dominating and truly impressive power that is Barça. And then come the goals.

Now, I am by no means a major football fan, but watching Barça play is like watching a smooth, contemporary dance. Between fashionable launches to the back of the net, players pivot and twirl, flick and slide, with an ease and grace more often than not reserved for the stage. But, I guess in one sense that is what Camp Nou is – a stage. A stage for dramatic performances, enthralled audiences, rose worthy triumphs and heart wrenching defeats. And the players, to the football world, are like Shakespearean actors or products of the Russian ballet – seemingly flawless professionals treating the crowds to an unforgettable show with a standing ovation almost guaranteed. What honour the players must feel (we hope) and what an inspiration they are to millions far and wide. And we mustn’t forget the 1.5million euro donation Barça makes each year to Unicef – surely an example to all top league sporting teams. 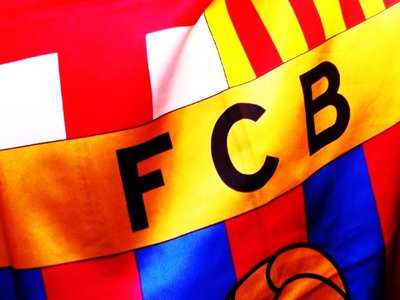