A fine balance between bravery and insanity

So it’s that time of year again, and La Mercè festival takes over the city I now call home, Barcelona. A whole weekend of spectacular events showcases the city at its absolute best, and quaint old squares are crammed full of performances and party-goers alike, delighting in the unmissable excitement and revelry. Perhaps none more so than Plaça Sant Jaume brings to life the passion, fervour and unique traditions of Catalan culture with its breathtaking display of els castells, in other words, human castles.

Now, for a British person, the first time you find yourself at a castells demonstration, the effect is none other than jaw dropping. Your thoughts range from “They can’t be serious!” to “What about health and safety laws?” and finally to “Is that a five year old climbing up there?!” You would have thought that this reaction would have somewhat diluted over time, but I can firmly declare that it hasn’t. Are the castellers courageous heroes or just mad? I really can’t tell.

So, the aim of the game (it seems) is for teams to construct a specially designed human tower by standing on each others shoulders and making it as high as they possibly can – and believe me, the heights they reach are astounding!

Hoards of supporters and unexpecting foreign tourists fill Sant Jaume square ready for an unbelievable show. The competitors, who have come from every corner of Barcelona, gather in the centre for pep talks and last minute adjustments, eager to undertake the seemingly superhuman challenge ahead. Then finally the moment arrives, and the first movements are made by the structural members of the groups. A blanket of silence gradually covers the spectators. Nervous tension spreads throughout the square and a wind band starts up with traditional music that seems specifically composed to increase the feeling of anxiety in the air.

The castells grow, rapidly gaining height, and concentration is deep – one foot wrongly placed, even a split second loss of focus could lead to disaster. A tremor of muscles from the castellers and a wobble here and there releases a gasp of horror from the crowd, and the hair on the back of our necks stands on edge. Incredibly however, teams remain calm. The towers, now seven or eight levels high, are nearly complete, but the dramatic pinnacle is yet to come. Suddenly, small children, surely no more than five years of age, begin climbing each construction like monkeys, with petrified though determined looks on their faces. Their task is to reach the top of their tower, climb over the heads of the two highest members, raise their hand into the air and successfully descend the other side. And whilst this is taking place, the castles must remain intact – truly a gravity defying feat!

Excitement and fear grows in the crowd - foreign tourists tearing out their hair in incredulity, local aficionados wondering if teams will reach their personal bests. With a sigh of relief all children have made it down the towers. In one corner a team is successfully and meticulously deconstructing their castle, one by one detaching themselves carefully, as if it were a game of Kerplunk. And finally, a roar of euphoria as all members reach the ground in one piece. Arms shoot into the air ecstatically, in awe of the team who in the eyes of the crowd are superheroes. Suddenly however, something catches our eye. Another castle still stands. But something is wrong. It begins with a hint of doubt. A quiver nervously follows, leading to a slight shudder of a knee which dominoes the slip of hands and heels. A cry of panic from the crowd and the castle turns to ruin, painfully collapsing. Bodies tumble on top of one another forming a mountain of limbs and the audience hold their breath in despair. But, it is revealed that everyone is ok, and the fans cheer in admiration for the fallen. Then it is determinedly announced that they shall attempt the castle again! And the crowd are delighted.

Every time I see groups of castellers creating their human towers I am blown away. They truly are amazing. Crazy yes, courageous no doubt. And so perhaps it is fair to say that the Catalan people have invented with their castells the perfect balance between bravery and insanity.

I won’t be joining a team anytime soon. 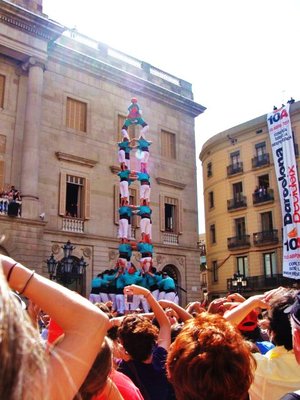 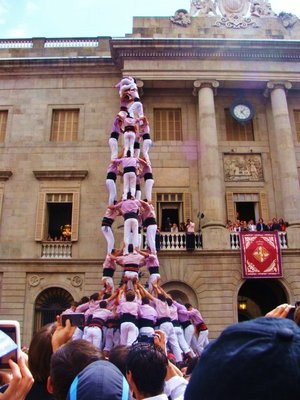 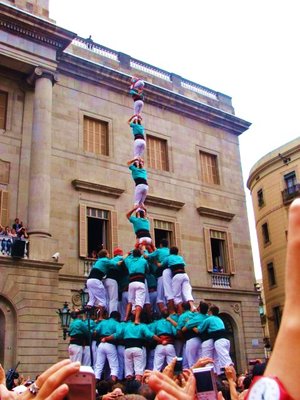