When Catalans go for a picnic.

My Catalan hometown of Terrassa, for a reason I have never fully understood, is an important centre on the Spanish jazz scene, and hosts a lively and popular festival each year. Locals flock to sun-drenched squares and prestigious venues to watch fantastic performances of classics old and new and take in a few rays and a few wines as they shuffle and shake to the invigorating beats. The highlight of the season is surely the ‘Picnic Jazz’, an all-day open-air concert in Terrassa’s central park, which people of all ages seem to enjoy with fervour. The music is unarguably energising and uplifting, but the thing that has always fascinated me most is the actual concept of a ‘picnic’ to the Catalan people, something that completely floored me at my first ‘Picnic Jazz’.

Now, to the everyday Brit, the idea of a picnic may consist of a cheese roll, a packet of Hula-hoops and a Penguin if you’re lucky. So, based on what was available to me in the local shops, I made myself a baguette, packed some Lays (Spain’s answer to Walkers) and threw in a few Estrella’s for good measure thinking that would suffice. (No, they don’t sell Hula-hoops and Penguins in Catalonia). And off I hopped down to the park for a cracking day of music and sunshine.

After an hour or so of smooth, melodic vibes it was time to tuck into my lunchbox delights, and I ripped back the foil and gobbled down my squashed baguette with glee. Delicious! Soon after however, I noticed a group of locals deep in concentration, constructing something that had four legs and a gas canister. They were also un-wrapping no end of utensils, pots and pans. It seemed that they had literally brought the whole contents of their kitchens with them. I was perplexed. What were they doing? Why did they need all that paraphernalia? And then, out came the cool boxes.

Onions, peppers, tomatoes, chicken, prawns… I was more and more mesmerized by the minute! They chopped and sliced, pruned and seasoned, and before long appeared a vast paella dish, and I suddenly realised what they had been so eagerly assembling – a mobile paella cooker! Unbelievable! ‘They can’t be serious?’ I thought. ‘For their picnic they’re gonna make a full-on paella?! In the middle of the park?’ And indeed, they were. 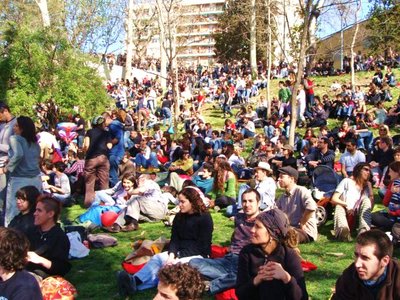 A fabulous aroma soon took to the air provoking deep within me serious food envy. Team-Paella were officially awesome! They stood around their mobile kitchen chatting and grooving to the music, sipping red wine and cava and stirring their paella now and again, no doubt to ensure their pristine, culinary standards. There before my eyes fresh fish, meat and rice were bubbling away amidst saffron and exquisite Mediterranean flavours. What they were breezily creating was a gastronomic, finest-restaurant-worthy feast. I threw a pathetic glance at my Lays. ‘My picnic is shite’ I huffed to myself.

The organisation and coordination of Team-Paella was truly applause-worthy. Soon their rustic feast was ready, the vivid colours of their saffron infused rice and bright, juicy vegetables gleaming within their heaped, steaming pan. They quickly put together a production line of plates, cutlery and napkins, and mouth-watering mounds of paella were shared amongst the group. They all coolly and unexcitedly tucked in as if coming to a park, setting up a kitchen and preparing a hot, delicious feast were a completely normal thing to do. But then I suppose for them it was. The more I looked around the more I began to notice the standards of other picnics taking place… homemade Spanish tortilla, whole legs of Serrano ham, brick-like chunks of Manchego, fideuà and traditional stews. It was a day of revelations. A day of discovery. A day of deep, cultural understanding as to what it means, and what happens, when Catalans go for a picnic. 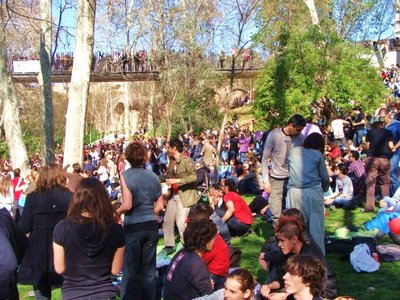